Bertram Fields, prominent Hollywood attorney and author of Royal Blood: Richard III and the Mystery of the Princes, passed away on August 7, 2022, aged 93, due to complications of Covid-19. Royal Blood is a lawyerly analysis of the accusation that Richard III murdered the Princes in the Tower. The book garnered commercial success and positive reviews in the Wall Street Journal, Publisher’s Weekly, and other media outlets.

Fields became a member of the American Branch of the Richard III Society in 1994. In an interview with Charlie Rose on American public television, he explained how he became interested in writing about Richard III. ‘My father asked me “when will you do something serious with your life?” I thought, I have spent 40 years trying cases and have written two novels – wasn’t that serious enough?’ Fields had always been fascinated with English history, and he sensed that the case against Richard III was riddled with holes. 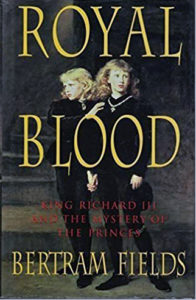 ‘I approached it (Royal Blood) as I would a law case: We were trying Richard III. We look at motive, opportunity, proclivity to kill, other suspects. The conclusion: No jury in the world would convict this man based on the evidence. Can I prove he didn’t do it? No,’ Fields told Rose. He examined the historical material that blamed Richard for the princes’ demise, and determined those sources were demonstrably unreliable. As for Shakespeare’s play, it was ‘clearly libelous’ but the ultimate fault for its portrayal rested with Henry VII and later Tudor monarchs, who had ‘almost no claim to the throne, therefore [they] had to create this myth that Richard was this terrible guy’.

Ricardians around the globe welcomed Fields’ book as a breath of fresh air, coming from someone outside the established historical community. And they might have savored a particular irony: it was by reading Charles Ross’s often-negative biography of the king that he learned about the Society and joined up. In researching Royal Blood, he was a frequent user of the American Branch’s non-fiction library. ‘The Society library is a great resource, especially for articles, and [then-librarian] Helen Maurer went out of her way to be helpful,’ he said in an interview with Laura Blanchard. He and his wife became benefactors to the branch’s research library fund.

Those whom Fields represented as a lawyer reads like a roster of the internationally famous: the Beatles, Michael Jackson, Tom Cruise, Madonna, Warren Beatty, Dustin Hoffman, George Lucas, and Steven Speilberg, just to name a few. ‘In the entertainment business,’ said one of his former clients, ‘walking into litigation without Bert Fields is like walking into the Arctic without a jacket.’ Richard III would probably agree, if he could speak from the grave.

The Society sends their heartfelt condolences to his family and friends, including his wife Barbara Guggenheim, son James, grandson Michael, and granddaughter Annabelle.

Read more about Mr. Fields in past issues of the American Branch’s journal, the Ricardian Register.