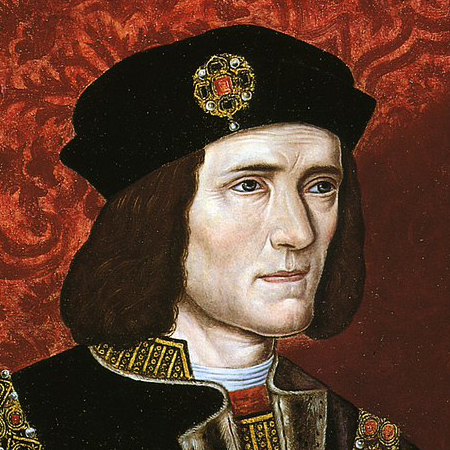 Richard III reigned from 1483-1485, and in that brief period became one of the most controversial kings in English history.  His bad reputation is chiefly the result of the work of popular Tudor propagandists and authors, most notably Thomas More and William Shakespeare.  The Richard III Society’s purpose is to dig beyond these myths, and through rigorous research, help a more accurate, fair, and balanced picture of King Richard III to emerge.

Due to the influence of William Shakespeare and centuries of productions of his “Richard III,” there exists a pervasive misconception that the real Richard III had a hunchback, a withered arm, and a staggering gait.  None of this is true.

The discovery of the King’s remains revealed that Richard had Adolescent Idiopathic Scoliosis, which the Scoliosis Association UK defines as, “a change in the shape of the spine during the child’s growth. It results in the spine curving sideways and twisting at the same time.”   He most likely would have begun to develop the scoliosis at around age twelve or thirteen.

According to osteologists, Richard’s spinal curvature would not have been noticeable under his clothing, nor would it have much hampered his ability to walk, ride, fight, or otherwise be physically active.   Other famous people with scoliosis include Usain Bolt, Elizabeth Taylor, and Princess Eugenie of York.

In 2018, a young historical re-enactor named Dominic Smee, who has scoliosis remarkably similar to King Richard’s, participated in combat training and trials to test how Richard’s condition would have affected his movements.  A clip from the resulting documentary, which aired on US PBS channels as “Secrets of the Dead: Resurrecting Richard III” is below.

“I am determinèd to prove a villain.” – Wm. Shakespeare, Richard III

If this is what you’ve heard about King Richard III’s personality, look deeper.  The psychological portrait of Richard painted by Shakespeare, thrilling though it is, is not borne out by surviving documentary evidence.

Professors Mark Lansdale and Julian Boon of the School of Psychology, University of Leicester undertook to create a psychological profile of Richard III, which they presented to the ‘A New Richard III’ conference in 2013.  Their conclusions point to a cautious and reserved nature, with an intolerance of uncertainty, but by no means a narcissistic psychopath.

You may watch their presentation below, or read the full article here.

The Richard III Society parent branch has an excellent biography of Richard here.

Read a Timeline of Richard’s family and events leading to his reign here.

Caroline Wilkinson, professor of craniofacial identification, created a facial reconstruction of Richard based upon 3D modeling of his skull.  Originally created with dark brown hair and blue eyes, the model has changed hair color several times as the DNA analysis has been fine-tuned.  It now seems likely that Richard had blond hair as a child, which darkened to brown in adulthood. 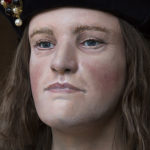 Putting a face to Richard III

Digital Artist Panayiotis Constantinou has recently used facial recognition software to create a lifelike reconstruction of Richard’s face, based upon the National Portrait Gallery painting. The artist has kindly granted us permission to use his work on our site. See more here. 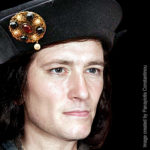 Vocal coach Yvonne Morley-Chisholm has been studying Richard’s skull and facial reconstruction for clues that the King’s physiology can give us as to what his voice might have sounded like.

A Voice for Richard

Meanwhile, researchers in Leicester have studied Richard’s letters to help determine his accent.

In 2012, a team spearheaded by Philippa Langley, informed by the work of Dr. John Ashdown-Hill, in cooperation with the University of Leicester, and funded in part by the Richard III Society, discovered the hitherto lost remains of King Richard III.

The remains were located under a carpark in an area that had been the site of the Greyfriars monastery, where King Richard was given a hasty burial after having been killed at the battle of Bosworth.

After DNA analysis and other evidence determined conclusively that the skeleton was in fact that of Richard III, he was reburied on March 26, 2015 in Leicester Cathedral. 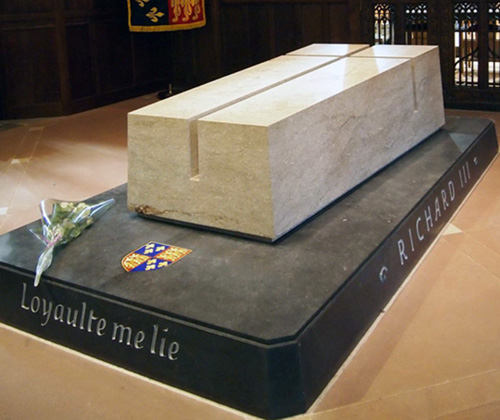 The Looking for Richard Project

History of the search for Richard’s DNA by Dr. John Ashdown-Hill

Documentary video of the reburial

St Mary’s & All Saints Church, Fotheringhay
Where Richard was baptised, and his parents & brother Edmund are buried

For more, read “The World of Richard III,” by Kristie Dean (2015), which describes every place associated with the King.

Visit our Learn Page for more about Richard III and controversies surrounding him.

Read a Timeline of Plantagenet family history, the Wars of the Roses, and Richard’s reign.